Following this journey i've had a look at the specs of the Audi D3 V10 S8 in a bit of a different light and at 319 g/km emissions, i'm just not sure I can afford that! The ~£500 tax isn't the bit that bothers me, nor the poor fuel economy because I could afford the money to run it. It's that extra 31g/km increase that I am no longer happy with.

That unfortunately isn't acceptable to me any more. It's a shame as I'm sure it would be an awesome car, but that's a hard NOPE from me now!


My car also has LPG. It's been a bit ropey on reliability because of a poor install before I bought it. After some research it seems that LPG is a 1/3 cleaner in CO2 and also other emissions.

After working the above out, i've prioritized getting the LPG system working better and using it more.
I believe I can actually save ~2 tonnes as there is still a bit of petrol usage with LPG, it is also cheaper than petrol too, so a bonus cost saving. WIN/WIN


Where quite I go from here i'm less sure. I'll probably be keeping my existing A8 for a while on LPG and increasing it's current 180k miles. About the only idea i've got at the moment is the more modern D4 A8 in 3.0L diesel guise. It's 174 g/km, so would probably save ~0.5 tonnes of CO2 on my current situation, but I need to know more about Diesel and that's probably for another day!

There is a 2.0l A8 hybrid, though it's specs are a bit meh and only 149 g/km, it's also not quattro, and as such even less of interest and if I have to ditch 4wd I can probably do better elsewhere

Popular posts from this blog

Covid 19 and the Enviroment

October 08, 2020
So.....Covid....Err....YEAH THAT! Not much has been happening I guess....Plans since mid March have been VERY quiet.....The flights and stuff I offset didn't happen, but I'd invested the money on purchase of the tickets and well, less carbon is always a bonus! The good news is that in lockdowns the air quality got MUCH better and a lot of people are now working from home which is also helping. My idea of investing in TESLA  threw me a bit of a curve ball....26  shares at $233 ($6058) went on a SILLY run.....The price for TESLA today is ~$434, but they also split 5 for 1 (26 x 5 x $434 = $56,420) I was SO wrong on the £12k capital gains thing - I sold a few here and there and now have some of those shares in an ISA account now (£3 a month, well worth it), but I've still got a load of TESLA shares I can't sell without getting hit by capital gains tax...As problems to have, there are worse.....And well that TESLA car looks a lot closer. I wanted the Cybertrukk and even pu
Read more

We do a German festival each year. It is one of the highlights of our calendar and it is amazing. Leipzig is deep in Germany and whilst technically, ferry & drive, it would take at least an extra day each way. Alas due to work I'm limited in the length of time I can take off. The festival is on the edge of this in terms of time already. It is plausible to train it, particularly if you live in London. We don't so it adds getting to London, then multiple trains to get to Leipzig. We both had back issues and tend to limit lifting and shifting of heavy cases as much as possible. It would be a very long day of lifting and shifting to do the train. Also having a rough look (eurostar is only 3 months bookable) at costs it is double plus! Flying takes two flights. Birmingham to probably Frankfurt, Frankfurt to Halle. It is the way we did last year after the Stanstead direct to Halle stopped running. It IS plausible to train down from Frankfurt and I looked at the carbon impact vers
Read more 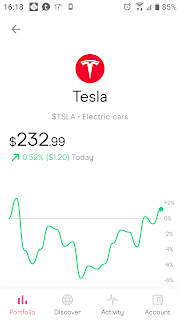 I couldn't afford a Tesla, or perhaps I won't at the moment. It's a bit of shame as the recent Model 3 is rated as one of the best cars, yeah, not just for an EV, but for all cars. It looks awesome, is full of tech and i know i'd love it! It would handle my commute for week or two and even be good for most longer range journeys without even needing to charge away from home, let alone the awesome supercharger network. They are definitely the way forwards and the normal major brands are still struggling to get to the level of the older Model S, let alone the model 3 or the soon to be released crossover model Y that'll take the car world by storm. The sales stats for the Model 3  are epic. I totally believe in the company, their vision and for shaking up the car industry and pushing Electric Vehicles into the forefront. The BASIC model 3 is £37k, I'd prefer the awd long range at £46k and neither include the £6k autopilot. Either would be way more of a stretch tha
Read more